Bath is the location of a number of fascinating festivals throughout the year. Here are some of my favourites:

The Frome Festival (held around 20 minutes drive from Bath centre) includes around 200 events from classical music recitals to talks, walks and even comedy with some very big names appearing. This arts festival is generally held around July time.

The Bath International Music Festival is usually held in late May/early June and includes a diverse selection of performers from jazz to classical virtuoso to world musicians and street performers. Established in 1948, the diversity of the festival is a great part of its charm. Part of this festival is called Party in the City – it celebrates local talent on the streets of the city.

Or, for something a little different, why not try the Bath Fringe Festival? As is the case with other fringe festivals, is incorporates circus arts, world music, theatre, cabaret, comedy, digital arts, dance and classical music in a very eclectic mix which brings the city to a different energy level… 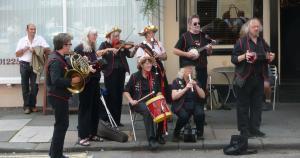 And for something a little more traditional and (sometimes) gentle, why not try the Bath Folk Festival held in early August? So much goes on here, from family fun day at the city farm, and an artisan market to traditional dance and storytelling. The many gigs held range from intimate to large-scale and performers even offer tuition classes in many instruments. Their New Shoots competition looks for new South West talent too, so why not second-guess the stars of tomorrow at this festival?

And, for a change from all this culture, music and art, why not indulge yourself at The Great Bath Feast!? This festival of great food and drink held in some of Bath’s most wonderful and decadent Georgian settings, is wonderful, and the visiting celebrity chefs would agree. With a Supper Club, talks, a Safari Supper, cheese festival, the Great Bath Breakfast and so much more, this sophisticated festival will keep you nourished for days… Running throughout the month of October, give it a try!

Other major festivals include the Bath Half marathon where the city centre’s street are temporarily transformed into an urban race track, and the Bath Running Festival which celebrates non-road running throughout Bath’s surrounding countryside. Or try the Festival of Nature (one day in June), performing arts events or the Bath Comedy Festival. Or for those who love agricultural shows, try the Royal Bath and West Show at Shepton Mallet, the Bath Digital Festival, Bath Mozartfest or the Bath Film Festival. And for a wonderful end to each year, Bath’s Christmas market is magical!