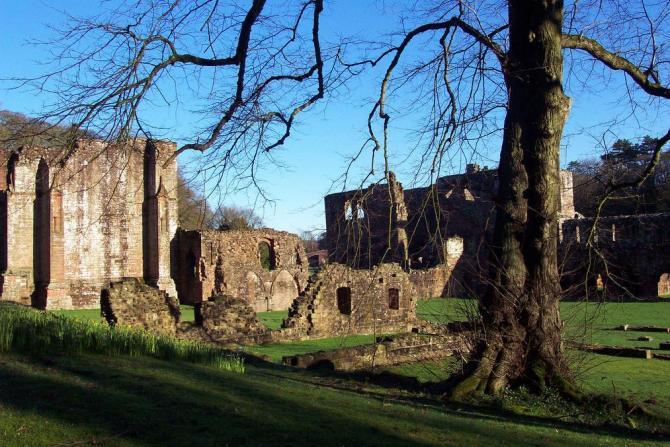 Visit the nearby ruins of Furness Abbey, once the second largest of England’s Cistercian Abbeys and take a tour of one of biggest draws in Barrow, the Walney Island Nature Reserves. South Walney Nature Reserve is a mecca for nesting herring and lesser black-back gulls, and is Britain’s most southerly breeding ground for eider duck whilst North Walney National Nature Reserve is a haven home to Britain’s rarest amphibian, the natterjack toad. Hundreds of species of birds occupy the island making it one of Cumbria’s top spots for bird and wildlife watching holidays.

Barrow-in-Furness on the Cumbria coast offers a great mix of attractions. Rich in innovative industrial and social history, the town features a spectacular Victorian town hall and in its immediate surrounds the magical ruins of an ancient medieval abbey and castle. The impressive Furness Abbey ruins date from 1127 when the abbey was founded by Stephen, later king of England. The ruins sit just north of Barrow-in-Furness off the A590. During recent excavations a hoard of medieval treasures was unearthed. Find out more in the on-site visitor centre. Refreshments are available in an adjacent coffee shop.

Piel Castle on the Furness Peninsula is accessible by ferry from Roa Island, running daily across the summer season. Alternatively, guided walks operate across the sands during low tide. Dating from 1327, Piel Castle was once the last mighty defence against the Scots and during the medieval era it was fortified and used to store wool and grain. It was also invaded in 1487 by Lambert Simnel and his followers as part of their attempt to take the crown from Henry VII.

Located at the tip of the Furness Peninsula and covering 50 acres, Piel Island is popular with walkers and wildlife watchers, as well as for fishing boat trips and seal watching trips. The island features a summer season inn – the Ship Inn with camping, accommodation and locally sourced food and ales available.

A free entry museum with free parking on-site, The Dock Museum in Barrow-in-Furness was constructed on an old graving dock and tells the fascinating story of the social and industrial history of the town and Furness Peninsula through interactive galleries, exhibitions and film shows. Take a journey through Barrow’s rich history in Shipbuilding in the Shipbuilders’ Gallery – the town was one of Britain’s major centres for shipbuilding through the 20th Century!

Other galleries include a social history gallery detailing Barrow’s history from farming village to mighty industrial 19th century hub. Here you’ll discover just who made Barrow, the intimate stories of workers and recreated time capsules of domestic homes and workplaces of old. Constantly changing exhibitions features on the Exhibition Floor and on the bottom floor a permanently running film show screens six films on the history of Barrow from medieval Furness Abbey to the vast village of the Vickers Shipyard.

Don’t miss the Furness Viking Hoard on show in the Dock Museum. Stone Age and Roman treasures are also on display and the museum runs regular family friendly events, workshops and fun days through the year. Conference facilities and a cafe are on-site.

Things to do in Barrow-in-Furness

A Victorian town of parks, Barrow has some fabulous family friendly green spaces including the central Barrow Public Park, Channelside Haven situated on the Barrow side of the Walney Channel and Vickerstown Park with a children’s playground and spectacular views across to Walney Island.

A major retail centre on the Peninsula, you’ll find a good mix of mainstream and independent shops alongside indoor and outdoor markets in Barrow town centre. If you’re looking for a coast and country Lakeland holiday base then consider Barrow and Furness, an area surrounded by glorious beaches including sandy Earnse Bay renowned as a national centre for kitesurfing championships and Biggar Bank located on the west coast of Walney Island. Both beaches have ample parking adjacent.