Torquay, South Devon’s Riviera capital (or ‘The English Naples’ as Torquay was known in the late Victorian era), is the ultimate mecca for Agatha Christie fans. The author was born in this iconic Devon seaside resort on 15th September 1890, and Torquay pays due homage with a package of Christie tours, trails, dedicated museum galleries, a hugely popular annual September festival and wider excursions direct from the resort to her beloved Greenway estate alongside the River Dart. 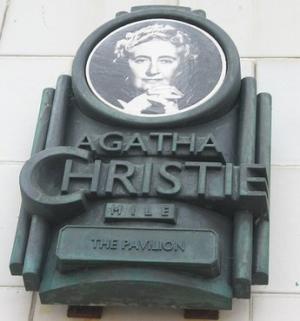 Torquay and the English Riviera’s sights and scenes were an inspiration to Britain’s most famous crime writer. Many a crime fiction fan has trod the path of the Agatha Christie Mile in Torquay, taking in a long list of heritage buildings, beaches, places she sat, stayed and more. Famous heritage buildings along the Christie Mile include the glamorous seafront Grand Hotel – guests can still book the suite where Agatha Christie spent her honeymoon night with Archie on Christmas Eve 1914! Other highlights along the Christie Mile include the author’s favourite beach, Meadfoot beach, the beautiful Torquay Pavilion first opened in 1912 where Christie regularly attended concerts and one of Europe’s most famous Stone Age caves, Kents Cavern, where Agatha first discovered her passion for archaeology. Kents Cavern appears as ‘Hempsley Cavern’ in the 1924 novel ‘The Man in the Brown Suit’. Historic hotels in Torquay frequently make an appearance in another guise in Christie’s novels, for example the great Victorian cliff top Imperial Hotel, Torquay’s first large hotel which opened in 1866 was the inspiration for the ‘Majestic Hotel’ in Agatha’s 1932 epic ‘Peril at End House’, and makes brief appearances in Miss Marple’s ‘The Body in the Library’ and in the last chapter of ‘Sleeping Murder’.

Don’t miss a stroll along the glorious Princess Pier – it was here that a young Christie loved to roller stake with friends. In the winter months skaters were allowed in the old Concert Room at the end of the pier, the largest rink in the West of England. Unfortunately the Concert Room was lost to a fire in 1974, but you can view fascinating old photographs of Agatha on Princess Pier at the Torquay Museum which has a gallery solely dedicated to the author.

Torquay’s Princess Pier is also your port of call for the ferry service from Torquay to Christie’s historic Greenway House and Garden cared for by the National Trust. The house has the air of a 1950s family home and is brimming with personal artefacts and family collections. 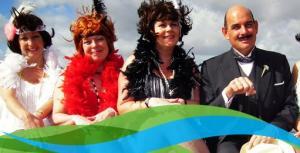